Pleasantly surprised and absolutely enchanted are phrases that come to mind when I think about my visit to Malta. Unfortunately, too short is another phrase that I think of as I was only there for 2 brief whirlwind days. Though Malta is one of the world’s smallest countries, an archipelago found between Sicily and Northern Africa (coming in at about 122 square miles of land – our fair city of San Antonio clocks in around 465 square miles) with a population of only about 450,000, two days is simply not enough time to experience all that it has to offer.
Malta has a delicious Mediterranean climate: hot and dry in the summer and mild and sometimes wet in the winter. The landscape consists of low hills and terraced fields, the limestone rocks, and prickly pear cactus made me feel almost as if I was wandering in our beloved Texas Hill Country. 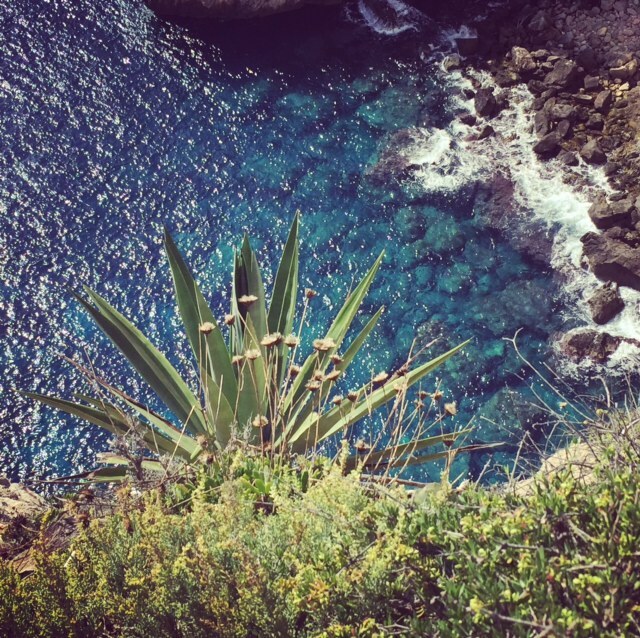 With evidence of human occupation dating back to 5200 BC, Malta has over 7000 years of history. It’s strategic location and gorgeous deep-water ports have made it a desirable location for just about every important Mediterranean civilization going back to the Phoenicians; with subsequent occupations by the Greeks, Romans, Arabs, Sicilians, Spanish, Knights of St. John, French and lastly the British, to name a few. Thanks to this series of ruling powers Malta is a wealth of culture. It has architecture, art, cuisine, music, and customs that are uniquely Maltese while also possessing a feeling of similarity to its other more famous Mediterranean neighbors. 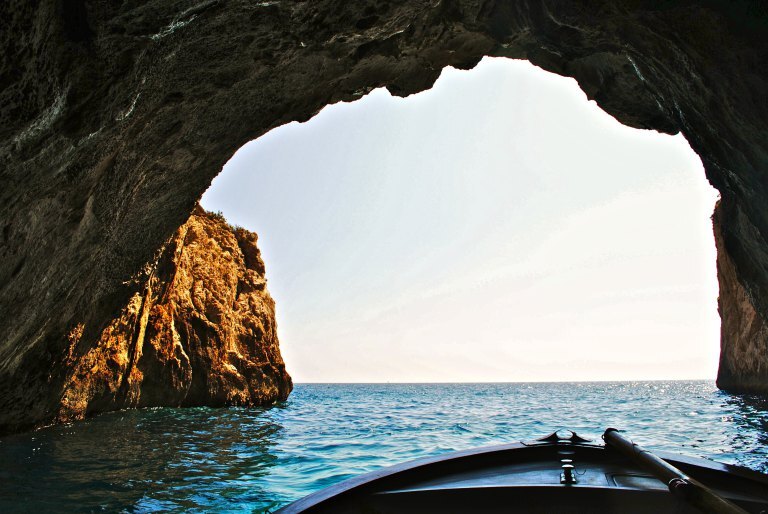 Upon my arrival, I was whisked away for a private tour, artfully arranged by local tour provider Exclusively Malta. Not knowing what to expect, once there I found myself staring out the car window like a kid in a candy store, full of excitement and delight. First, we stopped at the famous Blue Grotto. There is a great scenic overlook where you can take your selfies and admire the view, of course, but the really cool experience is to go further down the cliffs to where the locals are sunning themselves and swimming. From here you can zip out onto the water and into the caves on a small, weathered boat steered by a competent local. A short drive from the Grotto is the incredible Hagar Qim, a huge Megalithic temple considered to be one of the oldest free-standing structures in the world. This is a formidable structure full of mystery and mystique. The limestone has been battered by the wind and rain, but the historical and archaeological significance is still apparent. 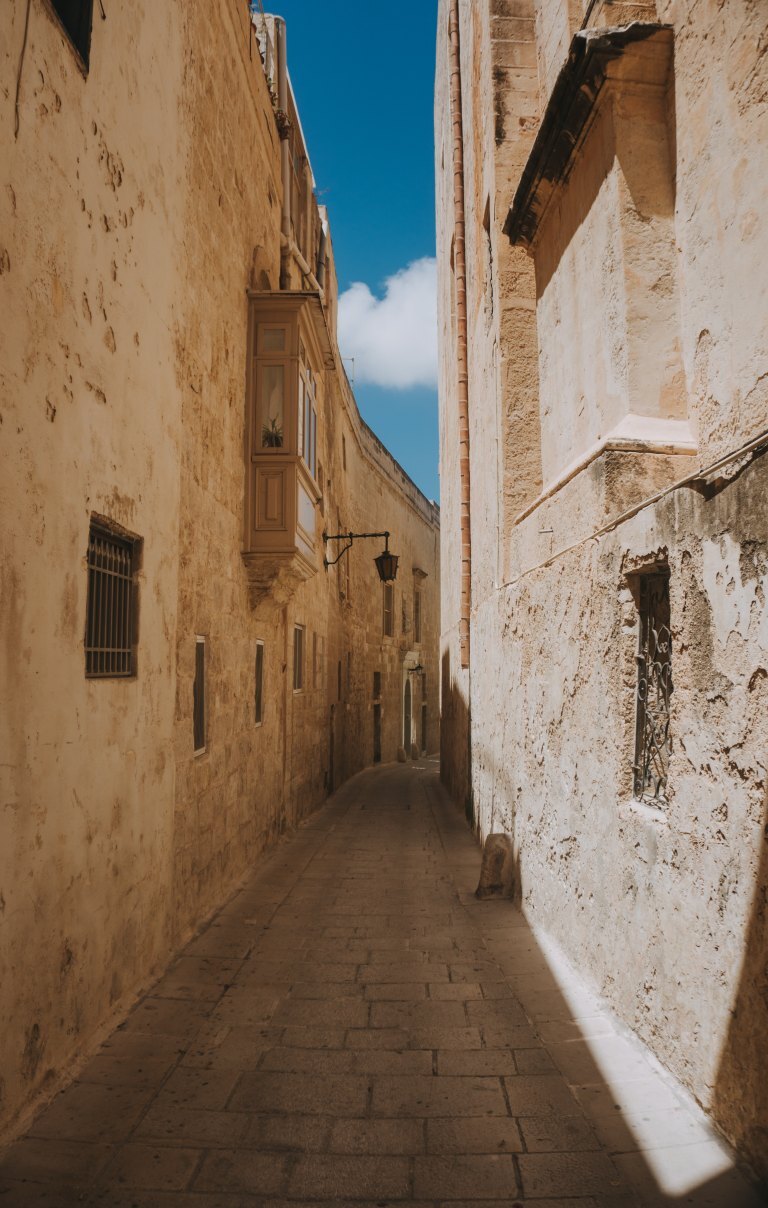 At lunchtime, we drove the few minutes up to Mdina, the walled Medieval city that once served as the capital and has recently been on seen in living rooms across the world as King’s Landing in Game of Thrones. (In fact, Malta has been the backdrop for many Hollywood movies and television shows!). Mdina is a charming, quiet, uninhabited city with great restaurants and shops as well as a pretty little cathedral and museum. Outside Mdina is Rabat where you can visit the St. Paul Catacombs for an intriguing look at ancient Christian and Jewish burial sites. We finished our day at the Dingli Cliffs, the highest point in Malta, topped by a simple church and a few benches, affording sweeping views of the island and sea. 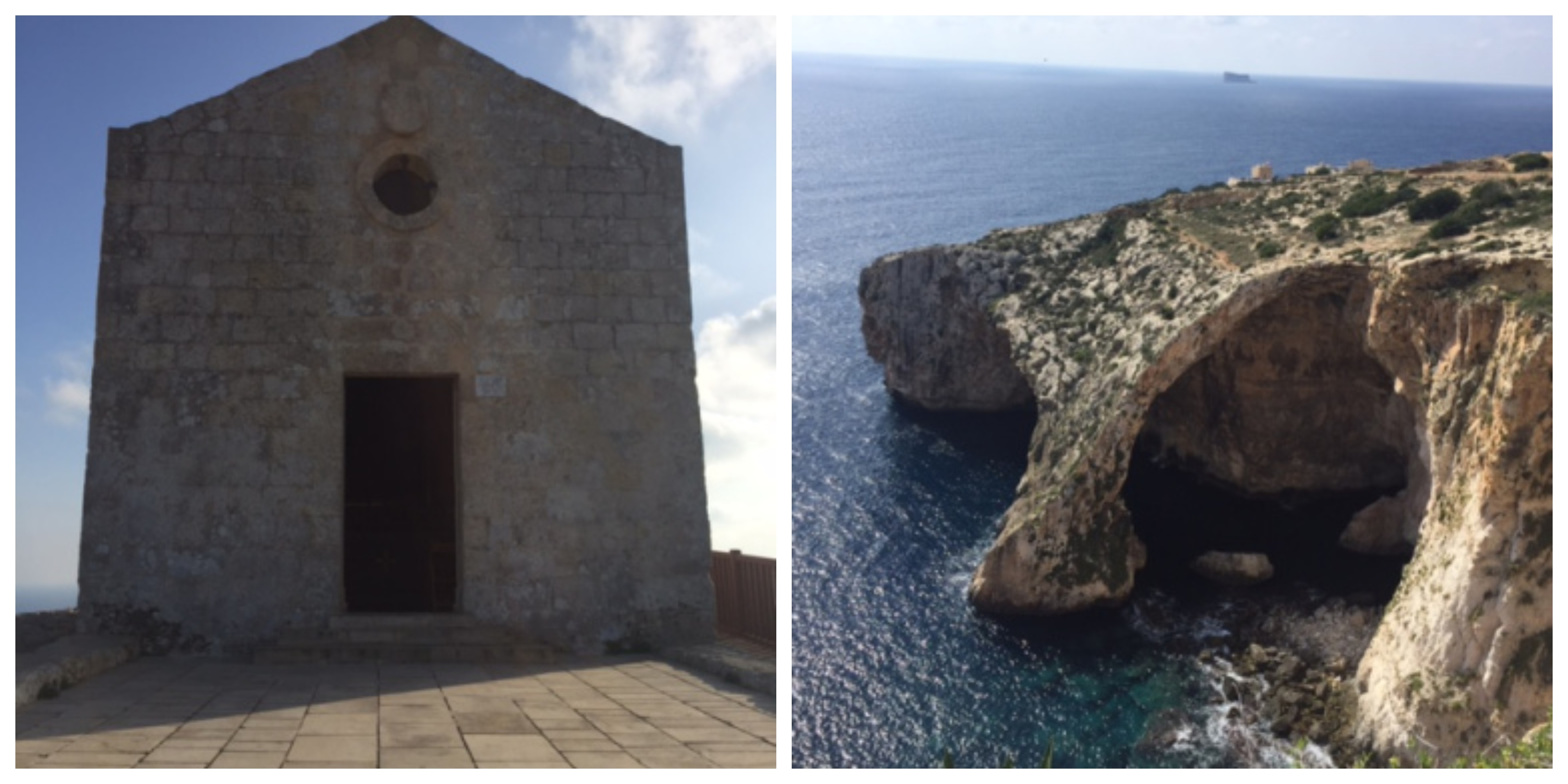 You can easily devote an entire day to wandering the streets of the enchanting capital, Valletta, and on my second day, I did just that. The streets reminded me of San Francisco as they rolled up and down hills lined with cafes, shops, and homes. Built during the rule of the Knights of St. John, it is very Baroque but has many other interesting architectural design elements through-out, including the signature balconies seen on most homes and buildings. Scars from the Second World War can still be seen in places and as you stand on the ramparts of the Upper Barrakka Gardens, with cannons pointed out into the harbor, the sense of being in a fortified place is palpable. After a stop for one of Malta’s signature snacks a pastizzi (a flaky pastry filled with ricotta cheese or peas), I leisurely traversed the city streets and squares with my guide while the bright Mediterranean sun shined down the streets and the wind whipped the flags and banners that were strung festively throughout the city. 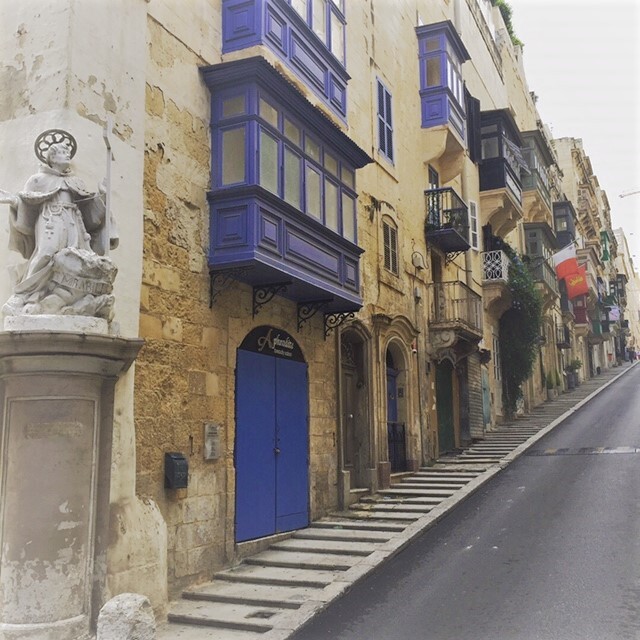 After a delicious lingering lunch at a quaint local spot, we made the short walk to the St. John’s Co-Cathedral. It’s gilded golden walls and arches sparkled, overwhelming me with its splendor. The cathedral houses two Caravaggio paintings that are well worth the price of admission, they are not to be missed. Valletta has many lovely little boutique hotels hidden down its steep lanes, each one creative and charming. The stately Phoenicia hotel is just outside the Victoria Gate. It is an icon with stunning architecture, gorgeous gardens, and incredible harbor views. Another option is the Intercontinental Malta, in the St. Julian area, for a more modern, fast-paced feel. 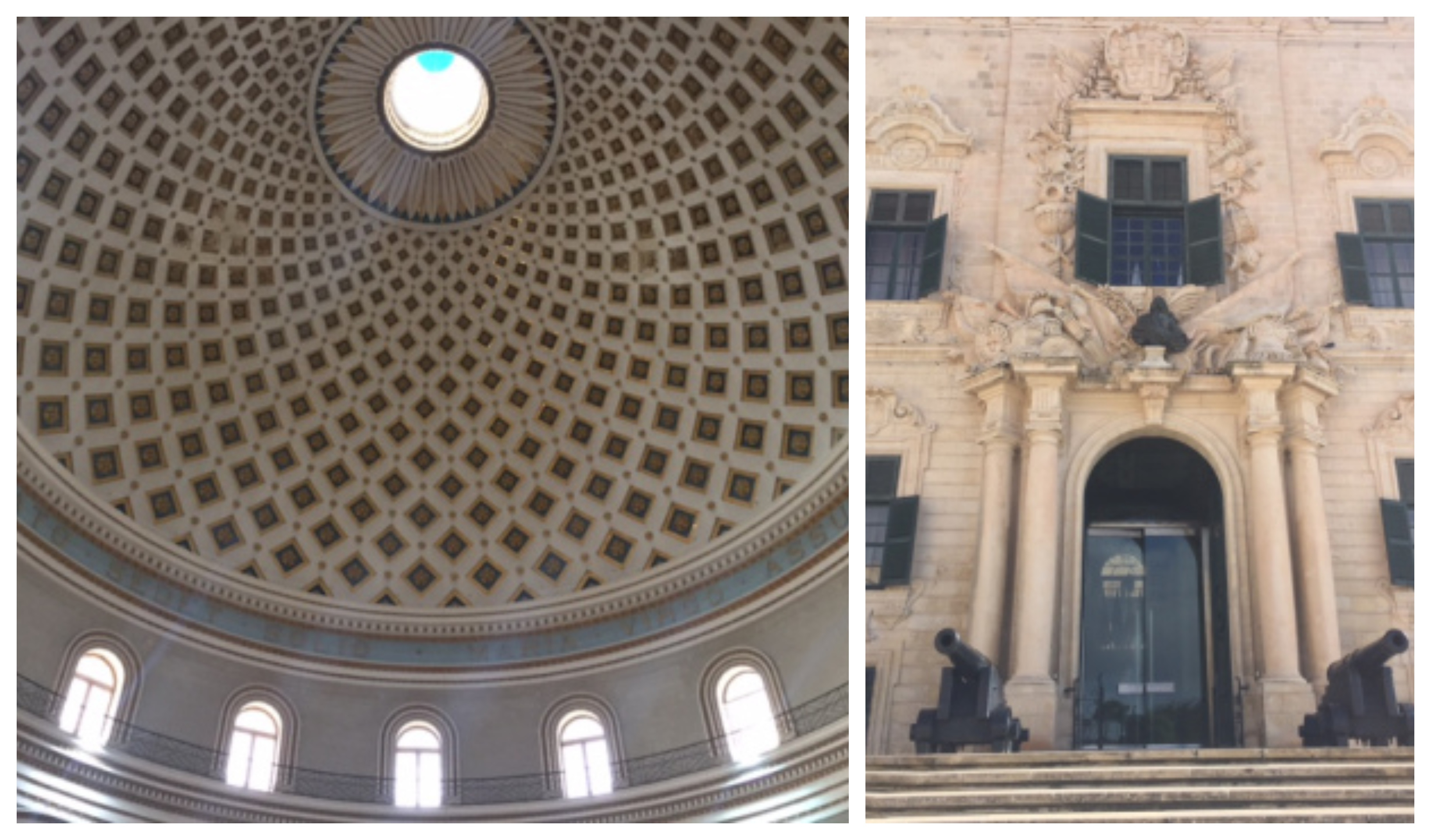 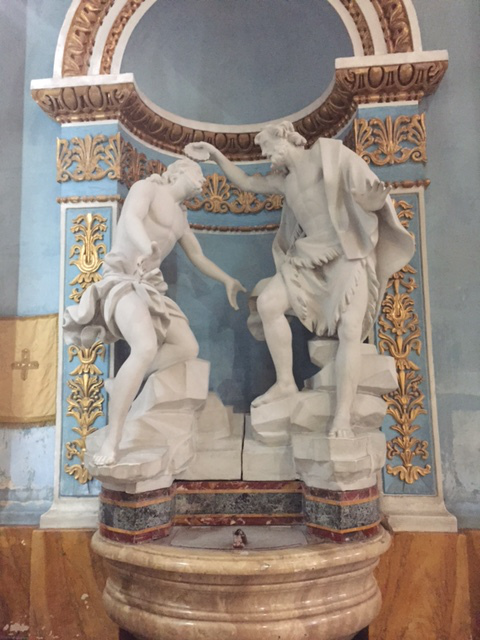 One isn’t just limited to wandering in and out of historical sites during a visit to Malta. It is also famous for diving, the turquoise waters revealing wild treasures below or you can spend your days idling on the beach soaking up the sun or jump into the sea for a swim from numerous spots around the island. The cuisine is creative and enticing – being both strangely familiar and wildly exotic at the same time. Don’t forget to have a sip of the island’s signature drink: a sweet liquor made from the fruit of the prickly pear cacti that crowd the limestone cliffs all along the island. The nightlife can get raucous in certain areas of the island. I recommend a short drive to a less touristy area where you can sit in a small bar frequented by the locals. Your concierge or driver can always recommend a hip spot to enjoy the end of the day with a pint of Cisk, the refreshing lager brewed in Malta. 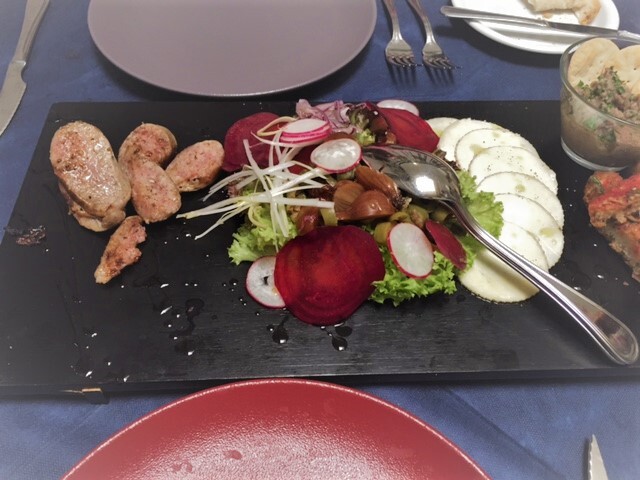 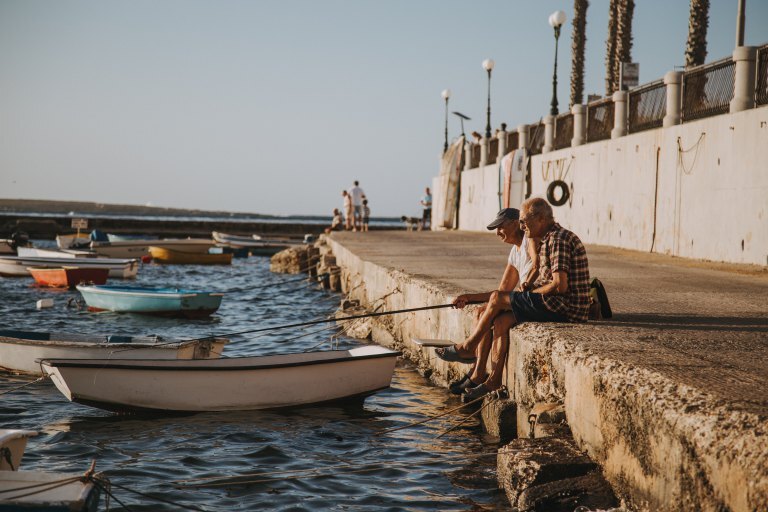 I wish I had had more time to see and do everything, but I was lucky enough to have amazing guides who whisked me to all the important places while also making sure that I got a feel for the authentic side of Malta. Everywhere you turn there are traces of a superpower gone by, be it the cross of the Knights of St. John on the flag or the classically British red phone booths on random street corners. Malta is a mashup of cultures that have melded together into something perfectly unique, so much so that it has been designated a European Capital of Culture for 2018. There will be exhibits, performances, festivals and celebratory events throughout the year. Malta has been flying under the radar for a while, but recently I’ve been seeing it on top 10 lists and Instagram feeds more and more. It would be wise to let us help you start planning your trip now and get there before everyone else does!

Until June 30th, travel advisors can nominate a person from their community they feel deserves recognition.Courtesy of African Travel Inc.,... learn more

Bubble Cruising? Yes, You Can Cruise Close to Home

COVID's impact on travel is having one brilliant effect: it's shining a spotlight on the boom in cruising on the... learn more

What's a Travel Bubble? Plus 3 Tips For Making the Most of Yours

You might see this view sooner than you think.The world of travel has begun to re-open. But it’s not like... learn more